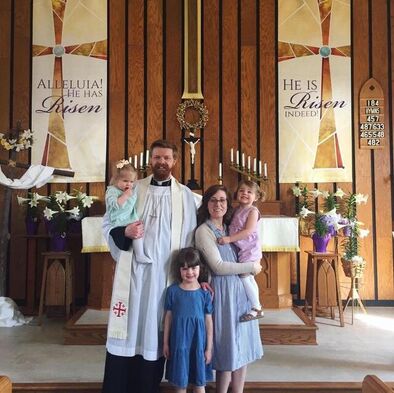 I was born in Kearney, NE on February 22nd, 1993, the fourth child of four to Andrew and Jeanne Wollberg. On March 28th, 1993 I became a member of God’s family through the waters of Holy Baptism. In Kearney, I attended a Lutheran school until the eighth grade. I graduated from Kearney Senior High School in 2011. After graduating high school, I went on to study History and pre-seminary studies at Concordia University in Seward, NE. On top of my studies at Seward I was also an active member of the campus’ pro-life club, Bulldogs for the Unborn, and I competed on the cross country and track teams.
Though I very much enjoyed my studies and running at Concordia, the most important thing which happened to me there was meeting my wife, Naomi. Naomi was born the youngest child of three to Rev. Jeffrey and Michele Kuddes on March 22, 1993 in Pierre, SD. She was received into the family of God through Holy Baptism on April 11, 1993. Though born in South Dakota, Naomi grew up in Arkansas and Minnesota (Waltham, MN, a mere 45 minutes from Riceville!) where her father served as a pastor in her youth. Naomi entered Concordia at the same time as me, to study Education and English. She was very involved on campus outside of her studies, such as theatre, being an RA and serving on the board of Bulldogs for the Unborn . On August 22, 2015 Naomi and I were married in Staplehurst, NE at the church we attended throughout our time in college. The day after we were married, we packed up our few earthly belongings and moved to Fort Wayne, IN for me to start seminary.
Since our time at the seminary God has blessed our marriage with beautiful children. The summer after completing my first year of studies, our oldest daughter, Henrietta Ione, was born on July 27th, 2016. Henrietta became a child of God on August 6th, 2016 when she was baptized by her grandfather. Our second daughter, Mary Dorothea, was born on December 22nd, 2017. Mary was born in Billings, MT, where I served my vicarage at Mount Olive Lutheran church. Mary became a child of God on  December 31st, 2017 when she too was baptized by her grandfather. Our third daughter, Viola Irene, was born to us on January 3rd, 2020 and washed in the waters of Holy Baptism on January 12th. Our good and gracious Lord has blessed us with another child whom we expect to welcome in November. Naomi and I rejoice with thanksgiving for the children the Lord has given to us!
Our family enjoys reading, going on walks, and cheering for the Huskers in a foreign land. We are all very excited to be living in Riceville and I am thankful to God for calling me to serve the dear people of St. Peter’s. If you are stopping by St. Peter’s, or just see me or my family around town, we’d love to chat and get to know you!